I couldn't stop tatting these delightful leaves, but I get creative and added flowers for a touch of colours and for more weight to the portion of the bookmark that will hang outside the book. Prefer the pink roses (pattern of Jeanne Lugert). 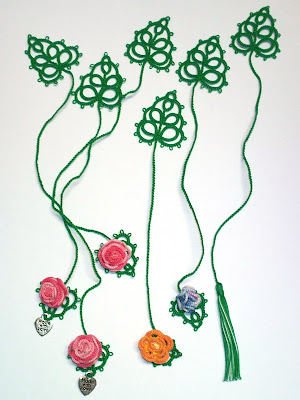 The doll-ATCs were in from Linda Marino! The bottom 2 were for the June's 4 Seasons Swap; the top 2 were for an earlier Fibre Swap which I never receive from my partner and Lin was such a dear to send me a set. All so bright and cheerful, and cute too, really lift my spirit everytime I look at them! Thank you, Lin! 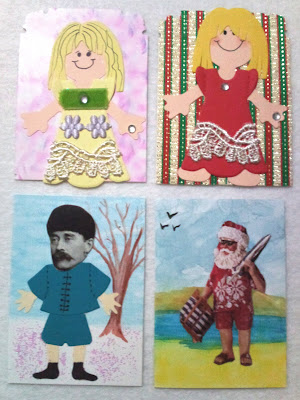 Spent a weekend helping my girl, Joey, for her school project, embellishing this yellow fabric with the Youth Olympics Games theme. I cut the felt words for her based on her sketch, and we explore difference ways to embellish them. She matched the colours and did the sewing herself. 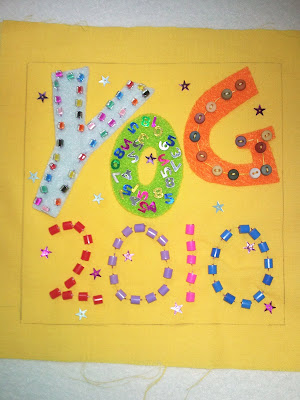 This was the last opera written by W.A.Mozart, just before his death, and is his most popular operatic work - The Magic Flute. I have watched it once in 2007, a 100-minute production sung in English by the New York's Metropolitan Opera, screened in Golden Village's GVmax on its 22.4 m width screen. Not quite anything like watching it live, but the big screen was a plus, and what to complain when it was only S$15 a ticket!
Although Tan Dun's The First Emperor, directed by Zhang Yimou, and with the legendary tenor, Plácido Domingo, as Emperor Qin, left a much deeper impression of the 2 screenings then, I was still pretty excited to get to watch The Magic Flute again, this time live at the theatre. Sang at the Esplanade Theatre last Saturday, in German but dialogue in English, the love story of Prince Tamino and Princess Pamina unfolded the magical fantasy world of Die Zauberflote. 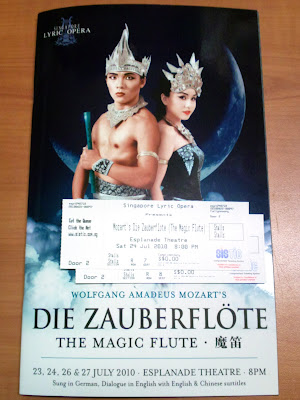 This time, I can better appreciate the music, and of course, the Queen of the Night's Die Holle Racht in Act II. The silly exchanges between the lovelorn bird catcher Papageno and Papagena, singing ‘Pa-pa-pa’ for about 48 times was tickling on the rib bones. Clearly from the applauses, Tai Hsia-Chun as the Queen of the Night and Song Kee Chang as Papageno were the 2 most favourite characters in the opera. Again, we have Nancy Yuen, soprano (Singapore) in La Boheme, singing the part of Pamina!
Posted by Singtatter at 7:33 AM

I really like how your leaves & flowers turned out. I love the fact that you also share the crafts that your daughter & others do on your blog too. For their creations are just as importan as what we do. Thanks for sharing them all with us.

The bookmarks look great especially with the flowers on the end.

Love the way the leaf bookmarks turned out! Snazzy idea there!!

Your bookmarks are beautiful and should bring springtime joy! :)

The Rose on the end of the leaf makes the bookmark so different. Wonderful.

Wow, thank you, everyone! Look like the flower and leave bookmark is a hit! They are pretty fast to tat up too. And the roses can be in all sort of colours, think I can tat more for the children for their Teachers'Day gifts.

Your tatted bookmarks are a delight. The leaves and roses are very pretty! I have tried needle-tatting but found it very time consuming and difficult.

I love the roses. Time to try that pattern. Thank you for sharing it.

Thanks, Ati. Yes, tatting (both shuttle tatting and needle tatting) is time-consuming compared to crochet and knitting, but to me, knitting is more difficult and I just couldn't knit properly!

Hi, Umintsuru, yep, the rose rolls up pretty round and full. Pretty on green leaf.

Singtatter
I'm a tatter in Singapore. I prefer working on a little craft project than working on household chore, and enjoying a musical rather than playing games! 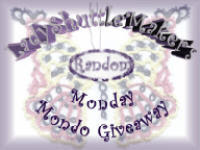